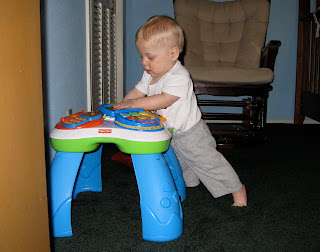 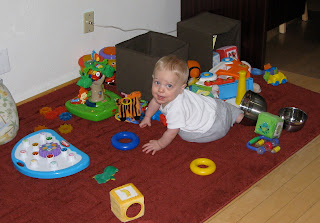 I took Alex to the doctor on Tuesday morning and found out that he had RSV (Respiratory Syncytial Virus) and a bilateral ear infection. He stayed home for the rest of the week, but at times you would not have known that he was sick. He did a lot of crawling, pulling himself up, and playing. He is a trooper and has done well with his antibiotic (which smells like pina colada) and his breathing treatments.

Alex is pictured standing with his music table and playing with his toys on January 20, 2010.
Posted by Sara at 11:25 PM