I rarely find direct flights when I take a trip, so a round trip often includes four flights. At the start of each flight, the flight attendant explains how to use the oxygen masks. You are reminded to put on your mask before assisting others. I've heard this analogy applied to women's lives, especially mothers, to remind us to not put others first at the detriment of ourselves. If mama's not happy, no one is happy!

My trip to Ohio turned out to be my oxygen mask. For the first time in two years, I was not responsible for my child for days. I slept in and ate out. I watched random TV shows. I just hung out with my family without always having an eye or ear on Alex. I was somehow able to make the best of this trip.

Surprisingly, I was able to do this with little guilt. I returned with a renewed energy for my daily life. I looked forward to dropping Alex off at daycare this morning even if it adds time to my hectic morning routine. I did not mind reworking a student's summer class schedule multiple times. I enjoyed going outside to check on the progress of our garden and then cleaning up after dinner. I hope to make this feeling last. I will need to remember to put on my oxygen mask more often than every two years...
Posted by Sara at 11:17 PM No comments:

I am in Ohio, but John and Alex are still in Texas. This is the first time that I have left Alex for more than a day. In the past two years, I have never been so far away from him. I miss my boys! John set us up on Skype, so we have been able to video chat twice.

My grandmother (Oma) passed way on Tuesday, so my mom and I made the trip back to Ohio. It is good to be with family and relax in my childhood home (where my brother currently lives). My dad repainted the inside of the house before moving to San Antonio, and it looks great. My room was yellow when I was little, but then I wanted it painted purple. When I was in high school, we painted it white. My mom let two friends help me paint it, which was a messy process. Now, my childhood room is yellow again. I arrived on Thursday evening and announced that I was "going to my room."

Today I went with a friend to Aullwood Audubon Center, which is where John and I got married. I had not been back there since our wedding in 2004. It is good to be in my hometown and very comfortable. We do a lot of running around during our planned visits back, but this trip is more relaxing.
Posted by Sara at 8:59 PM No comments: 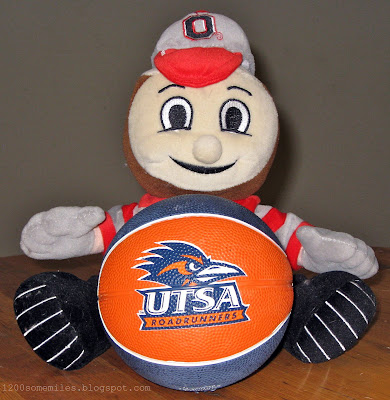 A #16 seat has never beat a #1 seat in the tournament (I learn these things from my dad.) The Roadrunners were not able to change that on Friday, but I am still proud of the UTSA Men's Basketball team. For the photo, I just pulled a couple of items from Alex's toys. My parents got him the UTSA Basketball and my brother sent him the Brutus Buckeye.
Posted by Sara at 10:26 PM No comments:

A couple of weeks ago, our neighbor borrowed the truck to buy lumber for a raised garden. We decided to try one too, and it is a nice addition to our yard since we are outside regularly with Alex. Last weekend, John and a friend (thank you) built a box for our raised garden, and the experiment began. We do not know much about gardening, and we are finally figuring out the South Texas climate after living here for over six years.

We planted tomatoes, broccoli, lettuce, herbs, carrots, cucumbers and flowers. The plants look good and the some of the seeds are starting to spout now. 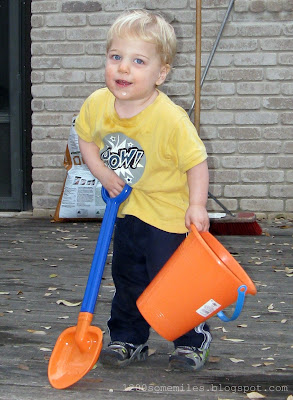 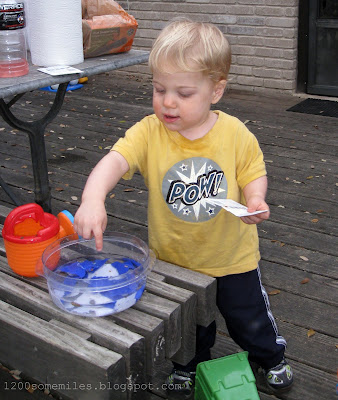 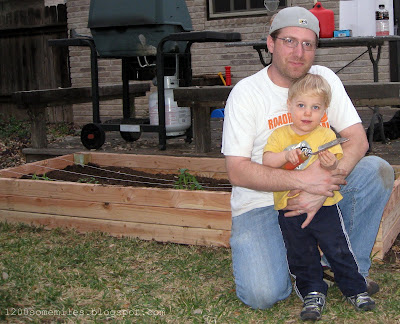 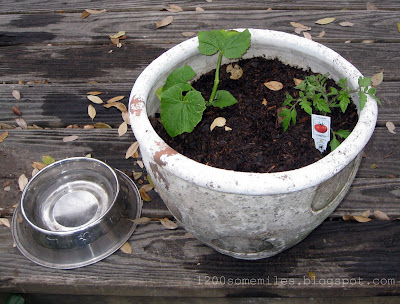 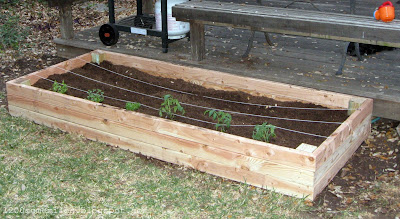 We discovered Elmo's World videos on the Sesame Street website, and Alex was mesmerized. 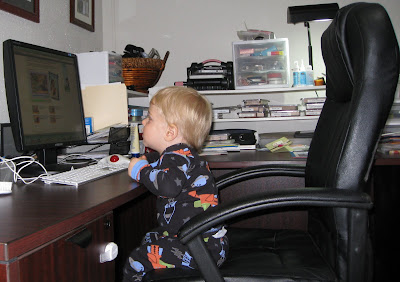 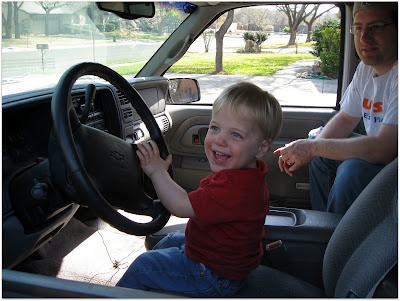 I've started doing some of my photo editing on Picnik, which is quite fun.
Posted by Sara at 11:52 PM No comments:

After a little cropping and editing, here is our family picture from 3/6/11: 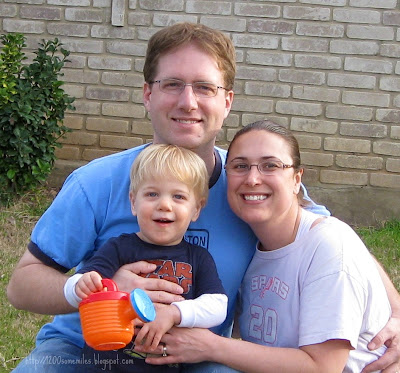 About a year ago our neighbor gave us a small Maple tree to plant in our front yard, and it is "Alex's Tree". Here is Alex and his tree on March 27, 2010: 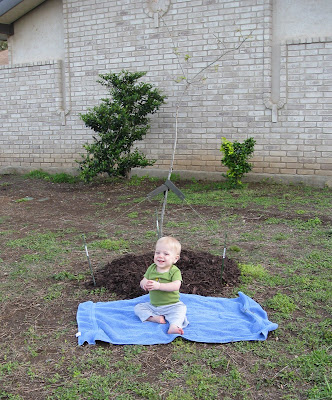 We plan to take a picture of Alex and his tree each year around his birthday. In just one year, you can see how our son and the grass have really grown. The tree is growing too. 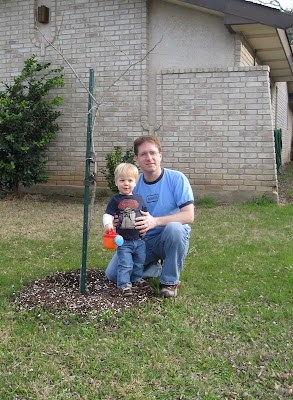 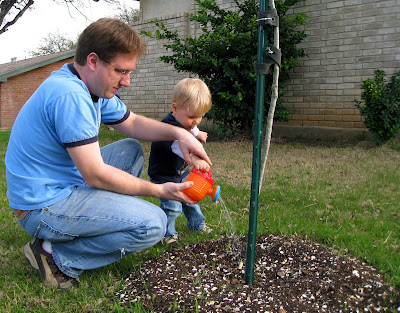 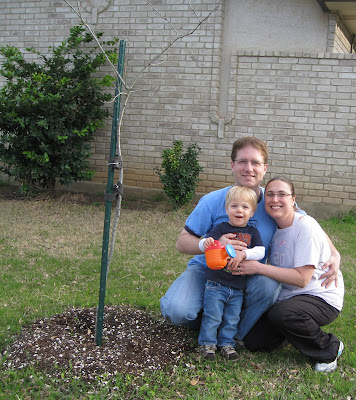 Here is what we've been up to lately: 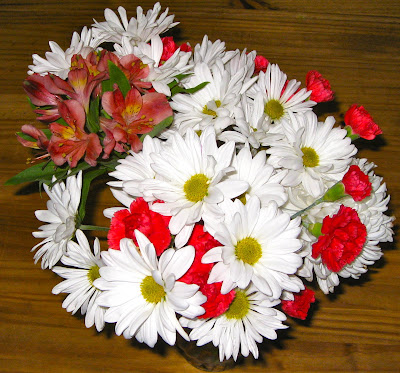 John gave me flowers for Valentin's Day and they lasted for a couple of weeks. It was nice to have flowers in the house. 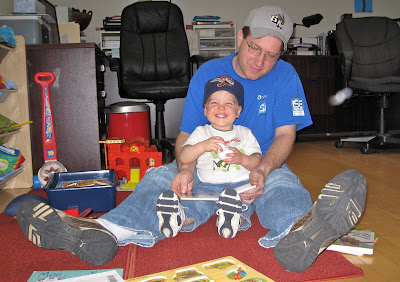 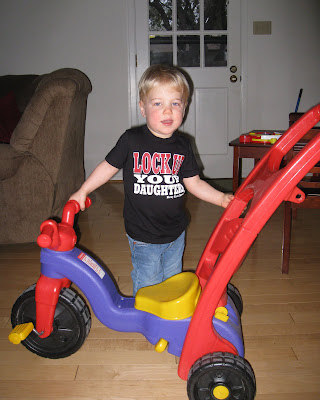 Uncle Bubba sent Alex a t-shirt that says "Lock Up Your Daughters" for his birthday. He actually wore the t-shirt to daycare. It seems that he does not have any girlfriends in his current room. (3/3/11) 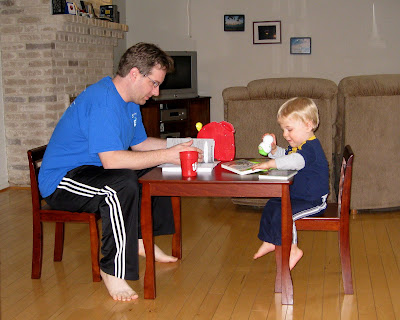 Alex is enjoying the new table that his Grandma and Grandpa gave him for his birthday. It will last him a long time. (3/5/11) 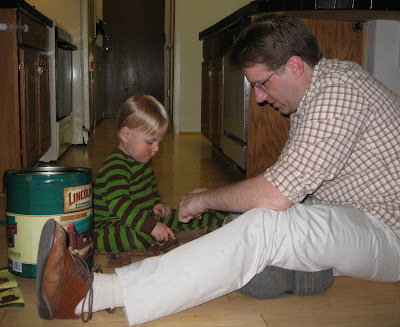 I first started scrapbooking in 2005, although I had made some scrapbooks as a teenager with photos from camps and Australia. In 2008 I took a digital scrapbooking class at jessicasprague.com and used Photoshop Elements. I was happy with the class but felt like I did not have enough time to really learn Photoshop. I printed those pages at Scrapbook Pictures and added them to my traditional scrapbooks.

I am currently using My Digital Studio from Stampin' Up for my digital scrapbooking. I was already purchasing their products from a local demonstrator, so this was a nice addition. I've found the software easier to use, but I still need to print these pages.

I also like Shutterfly photobooks, and have made a few 8x8 books. Becky Higgin's Project Life looks really neat in both the traditional and digital versions.

I started listening to the Paperclipping Digi Show and have learned more about digital scrapbooking and how scrapbookers approach Photoshop. Many people use templates and learn this software over time. I may give digital scrapbooking with Photoshop Elements a try again in the future. But maybe I should just pick a system and stick to it!
Posted by Sara at 12:00 PM No comments: 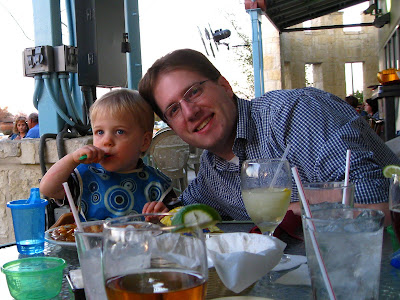 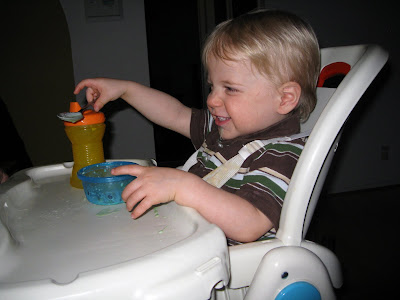 I am a little late posting this, but John and Alex enjoyed their birthday earlier this month. Having your son on the same day as your husband's birthday puts on the pressure once a year to prepare for this special day, but it was fun.

Alex woke up to a giant Elmo balloon. I initially wanted to get Elmo cupcakes for Alex, but I (correctly) realized that he would really enjoy the balloon. (See previous post about Alex not having a sweet tooth and remember that Alex refused to wear his Elmo costume at Halloween.)

For the most part, it was a normal Wednesday as we headed off to work and school. We met my parents for dinner at Ajuua and ate out of the patio. It was a beautiful night in San Antonio. We came back to the house for presents and ice cream. Alex just played with his ice cream, but the rest of us enjoyed it.

I enjoyed shopping for their birthday gifts and spending time with them. John and I did go on a date that Friday night to see Road Home in Gruene and had a great time.
Posted by Sara at 12:53 AM No comments: 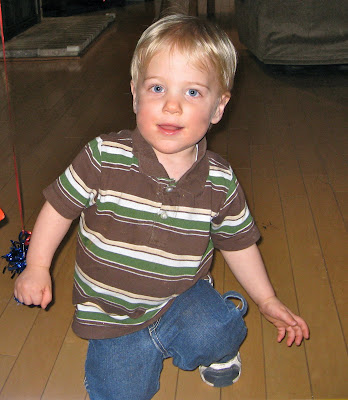 Seriously?! How did this happen? It is going by really fast, and we really enjoy our "little man."

He loves bananas! He ate four today and still asked for more.

He eats other healthy foods, including broccoli. He does not seem to have a sweet tooth, yet.

He loves to be outside in everything for 30 degrees to 100 degrees.

He has a great laugh!

He is putting three words together and mimicking almost everything we say.
Posted by Sara at 12:31 AM No comments: