Happy Birthday Brendan!!!
Posted by Sara at 8:50 PM No comments:

Us on a Diet

The first week of You on a Diet has gone well. We only missed one morning of walking and both ate well for the week. I packed salads most days for lunch and actually enjoyed them! It has taken me some extra time in the evenings to prepare food, but it has been worth it. We have been able to find healthy things when we want to eat out. There is a Bill Miller Bar-B-Q on almost every corner in San Antonio. Instead of getting the (fried) chicken strips with gravy and french fries, we now get the turkey with green beans and cole slaw. Both of us have more energy, which has been a nice immediate effect of our new eating and exercise plan.

In the past week I've had contact with three students that I know from my time in Student Activities. One emailed me because he is now a Marketing Coordinator for UTSA Housing after finishing his bachelor's degree last May. I ran into another student on campus yesterday who just found out that she got into medical school. Today as I was leaving work, I saw a student who graduated in May 2006 and is set to finish his master's degree this December. It is really cool to see these students moving forward.

Now that I work with only freshmen, I may not get to learn the end result for the students. I value this time in which I see some of the students from my Student Activities days move forward and accomplish goals in their lives. Yet, this has been only one of the aspects of why I enjoy working in higher education. I have gotten out of my office during the last week to visit freshmen classes as part of our Classroom Outreach program and I enjoy the energy on the campus. I am in a good place right now. I am glad that I stuck it out during the bumps in the road.
Posted by Sara at 7:13 PM 1 comment:

A few new things happened over the past week, which turned out to be a busy one. On Wednesday I was offered the Academic Advisor II position that I interviewed for in my office. My job is a great fit for me, so I am excited to be able to move up within my current office. I will have a little more responsibility, but I do not think that my job will radically change.

On Friday we held the first annual Academic Advising Conference at UTSA. It was a one day conference for advisors at UTSA and the surrounding areas. I helped on the planning committee and the event went well. We had some great speakers!

John and I have been reading the book You on a Diet by Michael F. Roizen, M.D. and Mehet C. Oz, M.D. The book goes over how your body processes food and then has an eating and exercise plan. The idea is that once you learn more about how your body works, you can make good eating habits automatic. So far, I love this book! I am happy that John is getting into it too. We started the You Diet yesterday. We cleaned out all of the junk food from our house. (I saved the non-perishable items in a box to donate to a food drive.) We went grocery shopping for healthy foods. We will have to rely less on convenience foods and cook more for ourselves. We need to walk at least 30 minutes a day and do strength exercises 3 times a week.

Last night for dinner we actually grilled and ate salmon. John and I usually do not eat fish unless it is fried! We cooked with fresh herbs too, which have such a great aroma. So far, I really like the eating plan.

I gave up Weight Watchers to switch to the You Diet. I think that I can stick to this new plan better than Weight Watchers. This plan has us focused more on losing inches around your waist than losing pounds.

My last new thing for the week was buying some Crocs. Yes, I have given in to the fad. I think that the new mary jane style is cute, so now I have a brown pair. They are so comfortable!
Posted by Sara at 10:27 AM 1 comment: 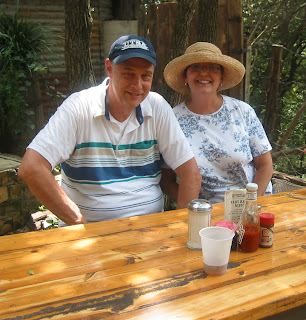 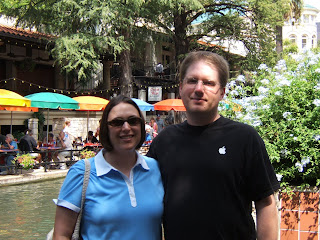 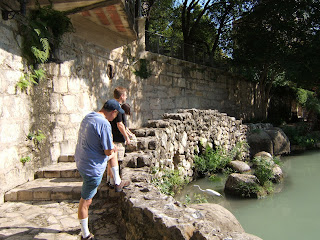 My parents visisted us last week and we had a great time. We visited the Riverwalk, San Antonio Museum of Art, and Gruene, Texas (pronounced "green"). Mom and Dad visited the King William District on their own. We ate at a couple of favorite places, including Shilo's Deli and Rudy's.

Above I posted a few pictures from the visit. The first picture of is of Mom and Dad at the Gristmill Restuarant in Gruene. The second picture in of John and me at the Riverwalk with Casa Rio in the background. The third picture is of Dad and Frida. She was a little timid at first, but Frida made friends. The last picture is of us looking at a crane at the Riverwalk. Not only do the tourists go to the Riverwalk for lunch, so does the crane. We watched the crane find a minow in the river.
Posted by Sara at 9:20 PM No comments:

Where were you six years ago today? Do you remember what you were doing when you heard the towers had been hit? Some parts of the day are vivid to me and I cannot believe that it has already been six years.

I has graduated from college in May and was working as a secretary at Doody Door and Hardware in Dayton. I often listened to the radio at work, so that was how I first heard about the events. Without a TV in the office, my first images were from CNN.com. I remember waiting and waiting for those pictures to load on my computer. We stayed at work that day but did not really get much done.

Once I got home, we watched the news for hours. We heard a sonic boom that night, and everyone came out of there houses to check on that noise. It was quite loud. I remember seeing all my neighbors standing in their front yards on Skylark Drive.

I was planning a wedding with Brian at that time, so Mom and I had an appointment with a photographer that night. We still went, but the wedding did not seem so important at that time.

I missed being on a college campus after the events of 9/11. I wanted the opportunity to discuss the events with my peers in an academic environment. I started to think more about the college campus environment, which may have helped lead me to an eventual career in higher education.

In May 2002, Mom and I took a trip to New York City. Their tourism had really suffered, and it was an opportunity to support the city. I needed to use a plane ticket and Mom had never been to the city. The financial district was somewhat of a ghost town, but the rest of the city seemed more back to normal. We had a great trip.

I had trouble writing the date 9/11 in 2002. I think that I actually future dated some things to 9/12/02. In some ways, the events feel so recent. In other ways, the events are becoming part of history instead of the present. No matter what, I think that this will continue to be a memorable day for those who lived through it.
Posted by Sara at 8:54 PM No comments:

Here are my new favorite websites from the last week or so:

Good Reads
I learned about this one at book club. My favorite feature is that you can make a to-read list. Someday I will read all of the books I've purchased! If you decide to use the site, you can add me as a friend by searching my first and last name.

Page Maps
These sketches are great for scrapbooking and making cards. When I get stuck, looking at a sketch helps me. I also like visualizing what I can fo with different numbers and sizes of photos.

Prima
They are coming out with some neat scrapbooking products. They now have watercolor paper that you can paint or color in. There are parts of scrapbooking that remind me of fun things from childhood. This new paper is like an adult coloring book. I own a couple of books about scrapbooking and they include lots of pictures.

Cool Scrapbooking Projects:
Cathy made a really fun recipe binder.
Donna altered the covers of her scrapbooks and they are fabulous.
I love these American Crafts 3-ring binder albums. They are so easy to use and the page protectors are nice and thick. I now have lots of project ideas.

Have a great week!
Posted by Sara at 9:50 AM No comments:

I probably would not think about Nicaragua much if I had not met Pam. I worked with Pam for almost two years in the Office of Students Activities. She left UTSA in the spring of 2006 to become a missionary with Food for the Hungry in Nicaragua. I have been amazed by Pam's ability to work towards this goal and commit three years to serving people in Nicaragua. Please keep those affected by Hurricane Felix in your thoughts. If you are interested helping those in Nicaragua, you can visit the Food for the Hungry website for more information.
Posted by Sara at 6:48 PM No comments:

Similarities between clothing and scrapbooking supplies

I have decided that I will approach my scrapbooking stash similar to my wardrobe. Here are my guidelines:

1. It is alright to invest in some good quality "basics." For me, that includes cardstock and tools. These are the items I keep around, like a good pair of black pants. I like to have a variety of colors of Bazzill cardstock handy.

2. It is fun to buy a few trendy items, but I do not have to follow all the trends. It is fun to watch all the new stuff come out from CHA (Craft and Hobby Association shows), but I cannot keep up with all of it. I'll just pick my favorites. Similar to fashion, there have been some trends that just do not work for me.

3. I will only buy what I love. I like bargain shopping but I do not like clutter. If I do not love a piece of clothing or a pair of shoes, it sits in my closet. I have bought some scrapbooking supplies on sale that have sat in my stash for a while now. I brought them home and realized that I mainly purchased them because of the low price.

I purchased some scrapbooking supplies early on for my wedding album. By the time I started the album, my style and scrapbooking knowledge have evolved. I have mixed some of my older and new purchases in the album. I have learned to be more careful with my purchases.
Posted by Sara at 4:00 PM 1 comment: