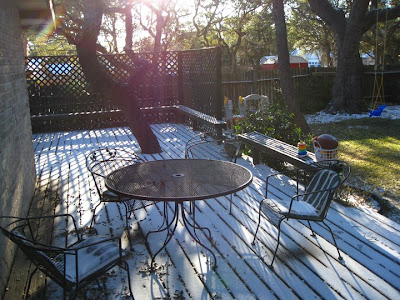 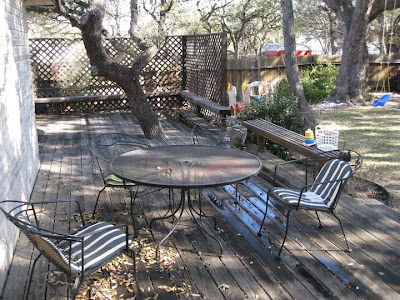 We woke up with some snow and ice in San Antonio. Last night UTSA announced a closure until noon today. The area highways were covered in snow and ice and closed until noon, so UTSA ended up closing for the entire day. (I've heard that the only plow/salt truck in the city is at the airport.) Alex got his first snow day today!

The first photo was taken this morning, and you can see that it was cold enough for the snow to stick. The second photo was taken around 3:15 this afternoon, and most of the snow is gone now. Yes, I can hear people in the North laughing over a snow day with just a little bit of snow, but this is South Texas.

It must be a sign of the times, because I first learned about our closures from UTSA on Facebook. I used to wait in front of the TV for my school to maybe be listed. I hated it when they went to commercial break right before our part of the alphabet came up on the closure list. Now I can just check the UTSA website or Facebook.
Posted by Sara at 4:43 PM