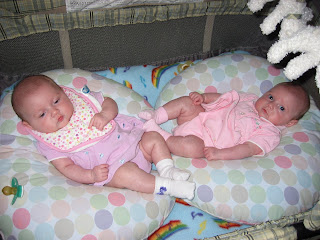 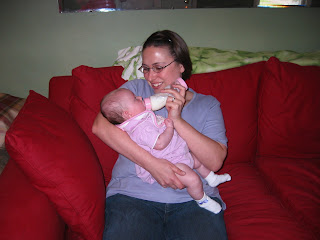 I had some time this morning to get the pictures off the digital camera from our trip to Ohio. The first picture is of the Gibson twins. Bailey is on the left and Sophie is on the right. The second picture is of me feeding Bailey. I hadn't fed a baby in a long time...

We had a good time in Toledo. On Saturday, Mom and I went to visit the Gibsons. Bailey and Sophie were born in February and are great babies! Bailey is a little bigger than her sister, so you can tell the girls apart. Sara and Dan are so calm for being new parents of twins! It was great to catch up with them and see the babies. 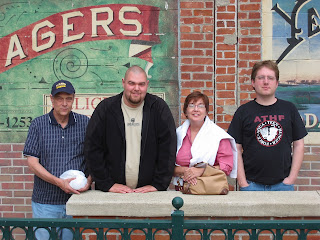 Mom, Dad, Brendan, John, and I had dinner at the Maumee Bay Brewing Company: good food and good beer.

We then had Brendan's tour of the University of Toledo. Here are pictures of the Phi Psi house where Brendan lived for three years and of Brendan and John in the Student Union. It is a nice campus and has a good "feel" to it. We also visited Brendan's favorite bar, Jake's. It was his Cheers where everyone seemed to know his name. Although they call him "Shrek" not Brendan. 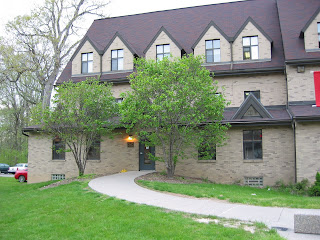 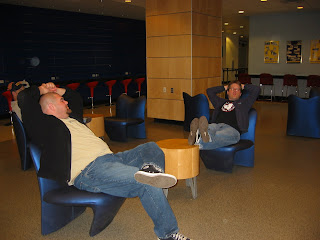 Brendan graduated with a double major in Marketing and Professional Sales on Sunday, May 6. After the ceremony he had to pack up the rest of his stuff and head back to Dayton. He had to be ready for a job interview first thing Monday morning. I noticed for both Brendan and I that our high school graduations were surrounded by lots of parties and celebration. Our college graduations were different. They were still a time for celebration, but the focus was more on "what's next".
Posted by Sara at 9:58 AM