Getting used to a Sippy Cup 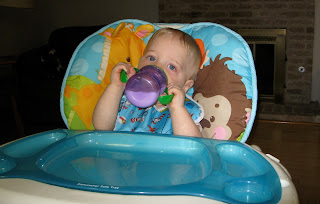 Alex woke up sleepy and hungry from his afternoon nap yesterday. When we tried to give him his sippy cup with his food, he was mad and had no problem expressing his feelings.

Alex's teacher gave me some good advice about transitioning from a bottle to a sippy cup. She suggested giving him the sippy cup with his food. If he does not want it at first, try it again later when he is more thirsty. This worked for us yesterday. He still gets a bottle first thing in the morning and in the evening. My goal is to box up those bottles on his first birthday.
photo taken 2/6/10
Posted by Sara at 10:56 AM