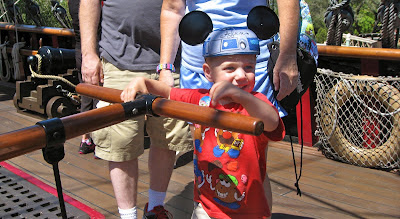 I thought that I'd share funny things that Alex (age 3) has said recently. I also want to remember these in the future.

Recently John asked Alex if he knows his full name. Alex said, "Yes, I have two names. Alexander Grafton and Alexander Messy Man." I must call Alex "Messy Man" a lot if he thinks that this is his name!

We wanted to buy Alex mouse ears on our recent Disneyland trip. I think that he tried on every pair in the store before settling on the R2D2 mouse ears. He tried on the princess mouse ears and said, "I'm not a boy anymore; I'm a grill (girl)."

Alex went to the park with his grandma, aunt, and uncle while John and I were at work on Monday. At one point he told a lady in the park, "There's a woman in my pocket." (Actually, he had a walnut in his pocket.) She responded that he was starting early.

Alex is pictured with his mouse ears at Disneyland on 6/29/12. I am still uploading and editing our photos from the trip.
Posted by Sara at 12:18 AM

What a good idea to write those little things down...I just love to hear what comes out of little ones' mouths!
Alison xx