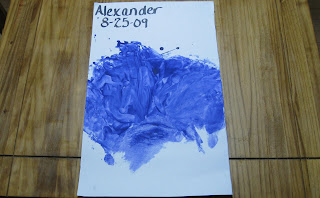 For Alex's second painting last Monday (October 26), he painted a foam pumpkin orange. (I think that he chewed on the pumpkin before paining it...) This time, they put him in a tub and he painted with his hands. Alex only had a little paint on him at the end of the day, but one of his teachers had a large blob of orange paint on her t-shirt care of Alex. The artwork and pictures of the kids making the artwork hang outside of the classroom. The caption on Alex's photo reads, "Alex paints like no other."
Posted by Sara at 9:42 PM