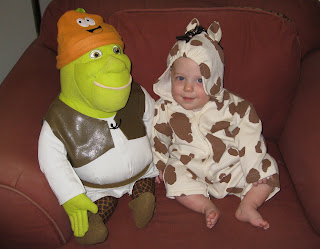 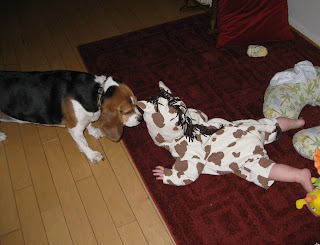 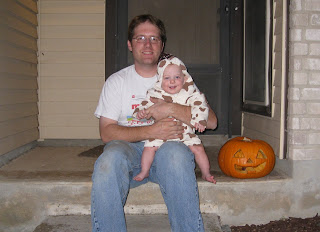 This post covers Alex's Halloween costume and his 8th month picture with Shrek. As a mom, I am all about multitasking and the blog is no exception.

Alex's costume was purchased used, so there was not a tag identifying it. It looks like a cow from the front and a horse from the back. I called it a horsey costume and John called it a cow costume. Luckily Alex is too young for us to confuse him with this. (We will try to make future costumes more clear.)

We took the pictures this afternoon instead of yesterday since Alex was tired. I have learned how important sleep is for kids. John carved the pumpkin yesterday to have two front, bottom teeth just like Alex. I had to make sure to take a picture of the back of the costume to show the part that looks like a horse. Paddy, my parents' dog, also wanted to be in the picture.
Posted by Sara at 9:00 PM