Last month John came home with the instructions from his boss that he needed to take a vacation, and we had been discussing ideas for one. We found a week in August that we could both take off from work. For me, it was the week after orientation ended and before the start of the fall semester. We started our road trip on a Sunday afternoon by picking up Uncle Matt (as Alex calls him) in Oakland and then we were on the road.

We spent the first night in Davis and visited friends that I met in graduate school. I was glad that we could reconnect and meet each others' kids. We found a hotel in the area to rest up for our drive to Portland, Oregon, the next day. The next morning, Alex saw a man loading his stuff onto a motorcycle and asked, "Are you Steve Jobs?" The guy looked at us strangely, and we think that he was not from the U.S. based on his accent. We could not help but laugh at Alex's question and the guy did look a bit like the late Steve Jobs in his later years.

We spent Monday driving to Portland with a stop off in Mount Shasta for lunch. When we told Alex that it is a volcano, he was concerned about the hot lava. 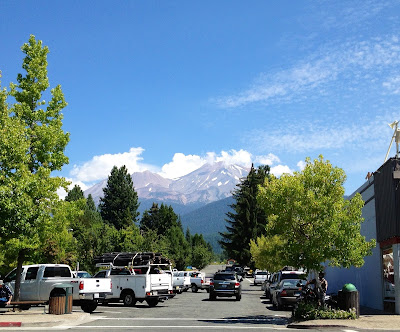 We made it to Portland in the evening in time for dinner and to walk around at dusk. 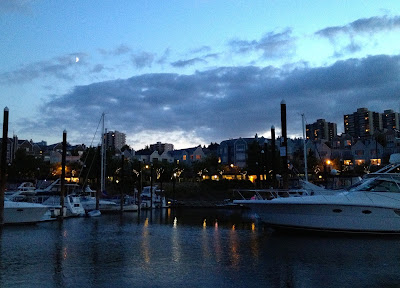 Well, it looks like you had blue skies, both day and evening. Hope it was a restful vacation for you all.

Hope you're enjoying the rest of your vacation!
Alison xx

Thank you! We really enjoyed our vacation and I have two more posts to write about it.

Portland is on my travel wish-list -- looking forward to reading more about it. I'm guessing you stayed with Sarah and Josh? So much fun! We need to figure out a grad school reunion.